What are you looking for?

The Middle East At My Door

September 2015 saw the unprecedented arrival of thousands of refugees from the Middle East at the Hungarian border near Budapest. Missionary Teanna Sunberg traveled daily to the Keleti train station from her home just 45 minutes away from the turmoil. Sunberg ministered to the refugees who were not allowed to continue on to other European Union countries where they hoped for a safe haven. This is Sunberg’s story of one such refugee family.

There, at the foot of their tent, I took a seat on a pink tablecloth that shielded me from the dirty ground. I received the offered tea, sweet and hot, and we talked about a once beautiful Syria, about their family who came and those who stayed behind, and about the baby that is on the way. Muhammad hoped that they would reach Germany before his first child was born. This is the sort of concern any normal father expresses, but in their current context, the stress was intensified by the fact that he and his wife are refugees.

I looked around Keleti train station at more than 3,000 people who made up the first significant wave of refugees into the European Union (EU). Though their journeys have started in various parts of the Middle East – Iraq, Iran, Syria, Afghanistan – the paths that brings them to Europe converged in Turkey. From that last Muslim nation, they embarked upon a dangerous journey across choppy seas to the coast of Greece. They walked and took buses, taxis and trains to move through Macedonia, Serbia, Hungary and on to Croatia, then Slovenia. They hope to finally settle in Denmark, Sweden or Germany.

Their journey, and that of those still coming, is fraught with danger, disappointment and a heroic determination to keep moving in spite of obstacles. smugglers have demanded nearly $2,000 per person for the dangerously over-crowded boats. Taxi drivers have charged upwards of $700 per person for an hour-long journey, and buses help them complete only a portion of the thousands of kilometers they must travel.  By the time Muhammad’s family reached Budapest’s international train station, Keleti, and bought their train tickets to Germany, they realized their plight had become a topic of international political debate. As leaders argued, discussed and disagreed, Muhammad and his family waited.

“It has been a long hard journey for my wife, so I wanted to take her to a hotel. But, when I gave the man our documents, he said, ‘You are Syrian, go away.’”

Muhammad’s family were some of the lucky ones who had a tent, but their six-day wait in Keleti was intensified by a famine of information and made miserable by a lack of privacy, no showers, no possibility to cook a meal and crude bathroom options. No one understood why Eastern European governments were prohibiting their transit and when or if they would ultimately be allowed to continue their trek towards a new home. The month of September brought a refugee crisis that cut a human swath through the heart of Eastern Europe.

Some estimates are that more than 300,000 Middle Eastern people left their war-torn homes, their devastating economic situations, and their systemically volatile political and social landscapes to find a new place of peace in Western Europe. Each of their stories has elements of desperation and courage. Most Syrian children have not been able to attend school for the last two to three years, people show photos of rubble that were once streets and everyone has a story marred by fear.

As we spoke, Muhammad’s mother called from Syria, where she is waiting for them to finish their journey. She cannot travel due to a weakened heart condition.

“Do you want to talk to my mother?” Muhammad asks, giving me his phone. “She is an English teacher and quite fluent. She will be happy to practice her English with you.”

The voice that reached from Aleppo to Budapest was clear and beautifully accented. I reassured her that the children were well, and that I could see their healthy faces before me at the opening of their tent.

“Thank you. Thank you for telling me this.  I am worrying a lot,” she says, “but, you see, in Syria there is no life anymore. Our children cannot die. They must live. They must find a way to live.”

About Teanna ('91) and Jay ('90) Sunberg -
They have been missionaries to Russia, Bulgaria and Hungary for nearly 22 years. They have four daughters: Lexi (19), Sophia (16), Lydia (14) and Jenna (13). Sunberg says her daily focus in September was on the refugees, first at Keleti, then at the border crossing near the village of Röszke. The crisis has since moved to Serbia and Croatia. Now the Hungarian refugee camps are the Sunbergs’ focus as they seek ways to be accepted as volunteers in the camps. To learn more, read Sunberg’s blog at centraleuropenaz.org. Want to help teams assisting the refugees? Visit Nazarene Compassionate Ministries at NCM.org. 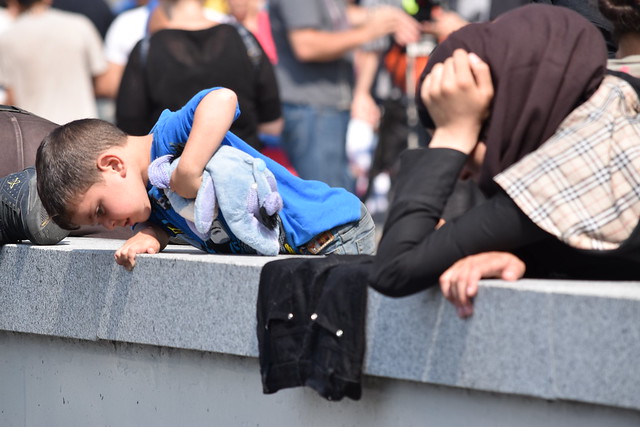 Articles In This Issue

Momentum builds with new construction, the return to in-person Commencement and athletic success despite the pandemic! Enjoy this issue of Accent Summer 2021.